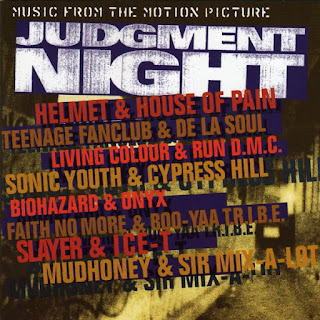 Had this one on tape from back in the 90's...such a great compilation in my eyes.  Yeah, I "stick to just the music" but I can't ignore what it says dude commenter!  Reading a new book, 'The Greening' by Larry Abraham from this time period when the new world order was starting up after declaring war against the environment as one of the substitutes for war in the 'Report from Iron Mountain' in 1967 leading to today's health war.  He focuses on 20 HYPE (Harvard-Yale-Princeton-Elite w Stanford/Berkeley too) leaders that start these famous organizations to get funding from large foundations.  Radical leaders who are a combination of Jesuits, Zen Buddhists, Stormtroopers and KGB who value snails over humans and put metal spikes in trees, killing loggers, etc.  They've mastered the art of grantsmanship and are in the positions of power today wreaking havoc like in the film STATE OF PLAY.  Features teams:  Helmet & House of Pain (refer to the environment stuff), Teenage Fan Club & De La Soul, Living Colour & RUN D.M.C., Biohazard & Onyx, Slayer & Ice-T, Faith No More & Boo-Yaa T.R.I.B.E., Sonic Youth & Cypress Hill, Mudhoney & Sir Mix-A-Lot, Dinosaur Jr. & Del The Funky Homosapien, Therapy & Fatal and Pearl Jam & Cypress Hill.             https://gofile.io/d/52CCS0
Posted by Viacomclosedmedown on youtube at 11:29 AM