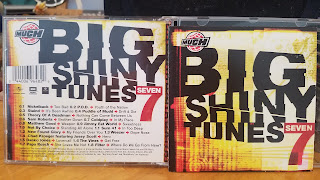 Well I've been pulling out some of this post-grunge I'm calling it from the Goodwill stack and remembering my last days of following the local edge radio stations and finding some gems.  Here is an example from Staind I had mentioned however, all the swears are edited out!!  LOL  Features:  Nickelback, P.O.D., Puddle Of Mudd, Theory Of A Deadman, Sam Roberts, Coldplay, Matthew Good, Jimmy Eat World (had also mentioned them), Not By Choice, Sum 41, New Found Glory, Weezer, Chad Kroeger featuring Josey Scott, Danko Jones, The Vines (flew with me on a plane when I moved out to L.A. for a job in 2002! Kind of like an escort..great guys!), Papa Roach and Filter (heard hit song at the beach three weeks ago from some dude hangin' in his car...LOL).