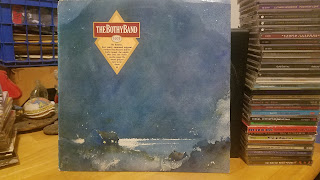 I am featuring this as main post for...HAPPY ST. PATRICK'S DAY... as I recognized a tune from my wee youth that my dad would play on his Irish record...it's called 'The Laird of Drumblaire' which is actually a Scottish strathspey which is O.K., as my dad traced our Scotch/Irish/English side to the Irish plantation's and on his 75th birthday told me (while the MN Vikings were dominating all except for last playoff game before Superbowl as we didn't want to have more losses there than Buffalo's 5 at the time..LOL) that we could actually be Norwegian as they were Overlords on the plantations with the Scottish and for his denouement (yes we have part French Voyageur) to his research would say the Vikings stopped their conquering ways after they met the Irish women!  Enjoy the holiday!

Well folks gotta say I'm happy today on my namesake day seeing this article on my regular news site: https://humansbefree.com/2022/03/boom-ukraine-becomes-the-first-country-to-implement-the-great-reset.html
For me the search for reasons started with being fired at tons of jobs and curious why people acted the way they do, was it diet--yes, was it media--yes, was it music scales from ancient history--yes, was it a bunch of globalist freaks with a hidden agenda---yes. And soon the Davos Agenda from the World Economic Forum took shape and now this article has it pinpointed to a fine focus for us all to fight against while we can. Thanks to Fivgunwest (click his icon to see the same newscaster he has posted in the past at his wonderful blog that challenges our beliefs at every turn--listen up poseur punks!)for connecting into our collective with Dr. Mercola coming in early as guest to my news site.

I found this post in looking up a file last night and is quite fitting for the shills out there: MARCH 16, 2021 AT 2:58 PM
Des Cargar said...
I think you confused St Patrick's Day with April Fool's Day....

strength, here's another one that analyzes reality, several relatives died after the puncture (among them my dear uncle who was cured of cancer and was reborn with that shit shortly after)