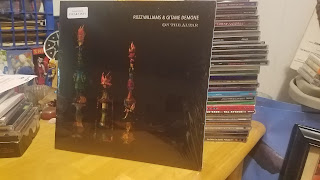 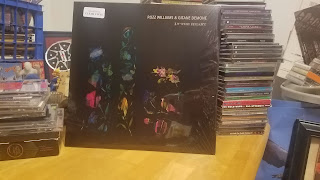 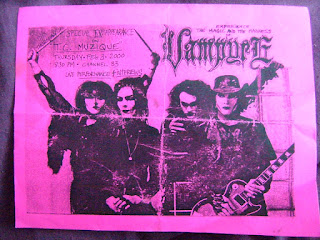 I feel a little guilty to post this now (see at end of this post) as I remember I bought them half a decade ago when I friended up Rik Agnew who played with Roz in Christian Death after he asked me to post all my collection for him. While out of work most of my 30's and 40's with small engineering contracts around the millenium I had befriended a Mpls. local Ravan Danzig who I would drive around to drug free rave parties on Lake Street to hear music and sing Misfit songs together as she kind of became my 'little sister' who I helped in the city but she introduced me to the band 'Vampyre' (yay organizing my hard drives revealed the flyer above).  I befriended the drummer/Russian-singing/orthodox jewish princess from New York who walked to MN in her youth and bought a house and had a little 5-year old at the time also named Ravan  and so became the bands driver in my blood-red-new-last-of-box-style-body Bonneville brass-hat car that eventually--while driving to parallel park at parties in the city ended up with no external rear view mirrors (LOL) while I was horridly unemployed (even though I would teach the employers their missing technology that I was reading right before interviews in that month's Popular Science magazine from my old subscription) but yeah she made me security as well as driver for her safe Dominatrix customers (she would yell 'red' if any issues as I waited nearby her dance with music etc) and became 'pyrotechnics expert' at the shows.  Well I heard later that Gitane was upset about the Eurotour and  record-company-European-half for this release darkvinyl that didn't promote her show in Germany very well with limited attendance.  I could have posted it back then to help promote her tour but I didn't know about it then.  Glad to finally open them and hear now--happens to be same week as the LIVE AT THE RAT 2LP main post that I discovered has a song by DMZ called 'Boy From Nowhere' that sounds curiously like my old favorite 'Spiritual Cramp!!!  Here are the lyrics to Spiritual Cramp:
Incurable disease on the day of rest
Walking on water in a sea of incest
I've got an image of Jesus
embedded on my chest
I can't leave home without my
bullet proof vest
Killing myself for the perfect honeymoon
fighting with scorpions tied around my neck
I hear the pitter patter
of a killer on the loose
children using their fingers instead of words
crosses burn your temples
on slaughter avenue
It takes too much time to say 'I refuse'
Time is digging graves for the chosen few
Children dig graves for me and you
Describe the illness I'll prescribe the cure
start your two day life
on a two day vacation
I've got a spiritual cramp going for my ribs
Those gangsters toting guns
are shooting spikes through my wrist
children using their fingers instead of words
Fingers bury children under the boards
I can die a thousand times
But I will always be here
with the power skull secrets
of forgotten years
the hangman's noose is trenched
with bloodstains of tears
my hands are the killer that confirms
my tears
Jesus won't you touch me
come into my heart
where the Hell are you
when the fire starts?
On a mission of the father
to reduce the gates of hell
the ivory bone eyed mother's flesh
is starting to swell
I'm setting twenty-two tables
for the funeral feast
Satan is by far the kindest beast
Source: LyricFind