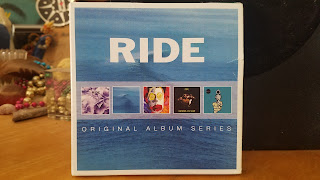 I had 'Tarantula' album on cassette a long time ago after getting interested in their alternative radio hit 'How Does It Feel To Feel' which Halo of Flies had done.  I got this five album boxset after someone in my face vinyl group said how great the 'Going Blank Again' album was along with the early EP's before he then purely bought House music only instead of shoegaze (called that because they hit the effects on the floor constantly while playing).  Comparing it to the soul revival Manchester scene that was going on in 1992--being a fan of Stone Roses and Charlatans U.K. (saw them a bunch of times).