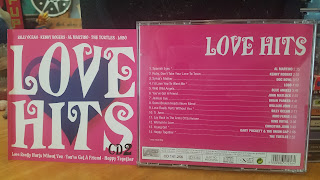 Well this one certainly pissed me off that I only found disk's 2 and 3 and was missing disk 1.  Normally this isn't an issue and I would go search it at Discogs or Ebay or with the word blogspot but still nothing.  Some German company that slipped in a few new versions of songs like for 'Young Girl' but amazing how they got all these high grade songs with some of the early versions from the no-name original bands.  Anybody GOT [please do share] disk one, might have been made for a retail store like Old Navy or some of the other ones I've seen.  Anyways the missing disk got me to pull out an old mix tape I made from Chilly Charles old KMOJ radio show 'Back In The Days Of Soul' and wow something to be said for D.J.'s in their element playing favorite tunes as some of these are so familiar but getting lost in time such as:  Keith Barrow - You Know You Want To Be Loved, Bobby Womack - You're Welcome, Stop On By, Jr. Walker & the All Stars - What Does It Take (To Win Your Love), Natalie Cole - Annie Mae, The Whispers - (Olivia) Lost And Turned Out and even William (Wee Gee) Howard with the timeless classic "Children Hang On (To Your Dream).  That D.J. must have known I was taping throwing such lost classics as these at me that Sunday night in college while doing homework no doubt.  Here are other artists:  The Isley Brothers, Jackson 5, The Temptations, The Spinners, Aretha Franklin, Marvin Gaye, Al Martino, Kenny Rogers, Doc Bowl, Lobo, Blue Angels, John Matlock, Brian Parker, William John, Billy Ocean, Nino Feras, King Royal, Christina John, Gary Puckett & The Union Gap, The Turtles, Tommy James & The Shondells, The Troggs, High Music, The Byrds, Terry James, John Crimson, Vince Taylor, The Colodas, The Fortunes, Chris Gold, The Lovers, Ben E. King, Melting Point and The Platters.                                             https://gofile.io/d/Qw5rWU
F.Y.I. R.I.P. Andrew Woolfolk of Earth, Wind & Fire:  https://www.soultracks.com/story-andrew-woolfolk-earth-wind-fire-dies?fbclid=IwAR2D2Vctr6vJYWVEQHkfUCs8fcn-7Mret2HU_sDNtkXA03Wwf7x56dgvgS0
Posted by Viacomclosedmedown on youtube at 1:14 PM