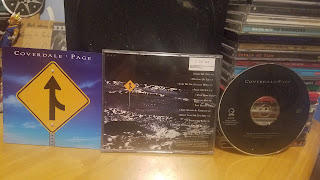 After posting the 'Wizard's Convention' LP last week, I went to Discogs to check up on Coverdale the guy from Deep Purple and read about this release that is due for the 40th anniversary pressing next year.  Didn't want to seek out the vinyl as the reviews were not good and people were waiting for next year, however, when I saw the cover I knew I had just seen it whether it was at Jerk Dog records that last week after sellin' off some records and then I saw it in the Goodwill pile!!!  The CD got higher marks than the vinyl and yeah, thought I was listening to an old Led Zep record first track!  That was first band I collected all their vinyl back in the RCA club in high school up until I scored the CD boxset for my B-day and had their best cover tune 'Traveling Riverside Blues' that we played at old yearly house parties long ago.                   https://mega.nz/file/HcEjUYIT#lrFWHM9NsNoePXOA66nfyMjNj_2hHrH9S0tsx633A-E
Posted by Viacomclosedmedown on youtube at 2:20 PM

This link is for The Orchids EP.

I fixed it donmar002 thanks as always!