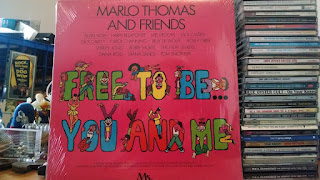 REPOST Request:  An old grade school friend reminded me how we used to sing the recent post of the Carpenters doing 'Sing' which was as big as this...what I wrote before:  O.K. this dates me as we played it in our early grade school classes and was also appearing on Saturday morning cartoon shows somewhere somehow.  I knew I was into Marlo Thomas for a reason and her Soho NY Village of friends.  The writers like Shel Silverstein are no surprise to us also.  Features:  The New Seekers (I added another tune by them from that era), Mel Brooks, Diana Ross, Harry Belafonte, Billy De Wolfe, Carol Channing, Rosey Grier, Bobby Morse, Sisters And Brothers, Dick Cavett, Alan Alda and Marlo, Diana Sands, Jack Cassidy and Shirley Jones.  Here is what they are doing now in my old MN schools (kind of of makes me sick):  https://humansarefree.com/2022/01/schools-push-transgender-materials-on-three-year-olds.html

Jungle Jim said...
Hey P,
could you please re-upload this oldie? "VA - Free To Be"
I dredged this out of my brain and could use some childhood nostalgia!
Thanks!!!